How We Can Cure “Tree Blindness”

In the article “Cure Yourself of Tree Blindness”, Gabriel Popkin talks about the term “tree blindness” and what it means. I know I, probably like many others, consider myself to fall under this category and want to fix this. In this article, Gabriel also talks about how to fix that. One of the biggest and easiest ways to do so is to start looking at trees and taking good notes of them. Going out and finding trees you may have never noticed before and trying to identify them.

On your commute to work or school or wherever you may be going, stop and take a look at some trees, check out the leaf arrangement, the fruits, the seeds, and even the bark. Try to distinguish between different ones and figure out what makes them unique.

As Popkin mentions, humans used to pay a lot more attention to trees early on compared to now. In fact, it was actually crucial for them for food and building materials. This is something we as humans now should try to pick up again, not necessarily for survival now, but maybe sometime in the future, it may be important again.

While it is hard to tell if these are all wild trees, they were the ones I had access to. As OSU students, we walk through The Oval many times while in school. One thing we may not take notice of while walking through The Oval is the amazing trees that live there as well. This can be due to “tree blindness”, or just the fact that you may be running late for a class.

Now that we are on the subject of campus, one of the most known trees to OSU students by default is the first tree I will mention, the Ohio Buckeye, scientifically known as, Aesculus glabra. 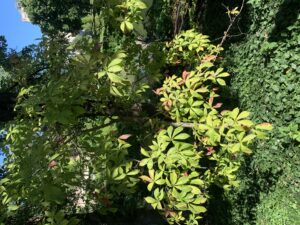 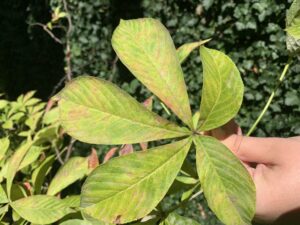 A. glabra has an opposite leaf arrangement and has a leaf complexity of palmately compound, which is noticeable in the close-up of the leaf. This tree species also have seeds that grow on them, buckeyes, that contain tannic acid, which would not turn out well if eaten by humans. This is also pretty familiar to people living in Ohio, as that is the head of the mascot Brutus. Although A. glabra, or Ohio Buckeye tree can be found about anywhere on campus or in the state of Ohio, I found this particular one on the bed of mirror lake, which is a pretty urban environment, but also near water. One thing about this tree that I recently found out is that even though the seeds of Ohio Buckeye as well as the whole tree in general are toxic to humans, squirrels are able to eat them raw, and even humans can eat them when prepared correctly.

Next, we have a Pawpaw tree, scientifically known as Asimina triloba. A. triloba has simple leaf complexity with an alternate arrangement, which can be seen in the pictures below. These leaves are also long/oval shaped and large in size as seen in comparison to my hand. 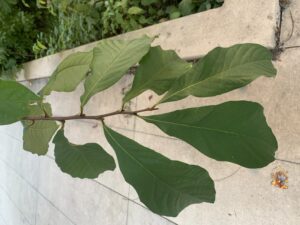 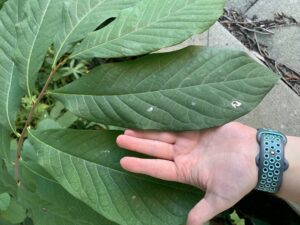 Although found in many spots around campus, I found this particular one near Jennings Hall, which is less urban but still near developments. This tree also grows fruits that are edible to humans, despite other parts of the tree not being edible. These fruits don’t always grow, which can make them hard to find sometimes. One interesting fact that I learned recently through Ohio friends is that pawpaw fruits are actually the state native fruit of Ohio and that there is actually a festival devoted to pawpaw in Ohio.

Another species I wanted to add, is one less familiar to us (at least me), which is the American hackberry, Celtis occidentalis. As can be seen in the picture below, the leaves of the tree are simple and alternately arranged. It is also noticeable that the leaves are also coarse-toothed. 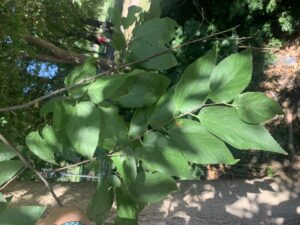 C. occidentalis also bear fruits called sugarberries (hence the name berry in the tree name) and attract many bird species, including cardinals (state bird of Ohio). Compared to other types of hackberries, the American hackberry has bigger fruits and more defined toothed leaves. I found this American hackberry sitting on the edge of The Oval, which is a more urban environment.

One interesting fact that I did not know about C. occidentalis, is that they have a butterfly species named after it called the hackberry emperor (Asterocampa celtis). The American hackberry is the only host plant for the caterpillars of hackberry emperors.

I chose this next tree for its elaborate branches and shreddy bark, which can be seen in the picture below. This is the American hornbeam or scientifically known as Carpinus caroliniana. C. caroliniana has simple leaves with an alternate arrangement. Just like the tree before, the leaves are also toothed. In comparison to its close relative, Ironwood, American hornbeam has a more rough and shreddy trunk, while ironwood has a smooth and sinewy trunk. I found this American hornbeam (C. caroliniana) on The Oval, an urban environment. 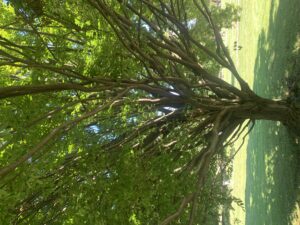 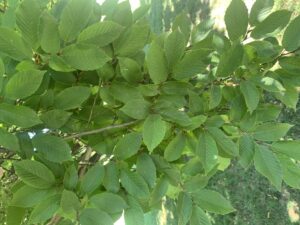 An interesting fact about C. caroliniana is that it is also known as musclewood. This is not only because the branches look strong with weird anatomy, but also because the wood of the bark is also very strong.

This next species I wanted to add in specifically because it was not in the field guide we use and I had to find it on another. This species is an oak tree and is specifically the sawtooth oak, scientifically known as Quercus acutissima. As the common name mentions, the leaves are this tree are toothed and are alternately arranged with simple leaves. Along with other oaks, the sawtooth oak also bears acorns, but in comparison, sawtooth oaks’ acorns are poisonous to many mammals. I also found this interesting tree on the oval, an urban environment. 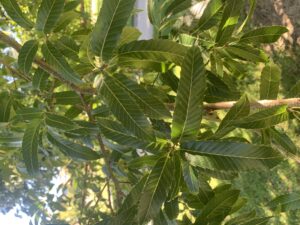 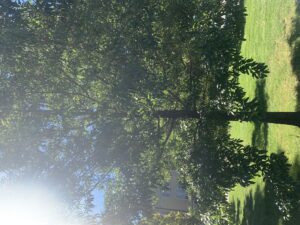 One interesting thing I found out when identifying this sawtooth oak is that not all oaks have the same leaf type. White and red oaks both have lobed leaves and are not usually toothed, while a sawtooth oak leaf (Q. acutissima) has no lobes and is toothed.

For the next one, it is one that is a bit more familiar to people and is definitely familiar when looking at it’s unusual bark. This is the American sycamore or Platanus occidentalis and it has a alternate leaf arrangement with a simple leaf complexity. This tree species is fairly common, but I found this particular one on the oval as well, which is an urban environment. Something that helps this tree stand out compared to other species like I mentioned before is its bark. The bark on P. occidentalis flakes off in puzzle-like pieces and reveals a white-ish underbark as shown in the picture below. 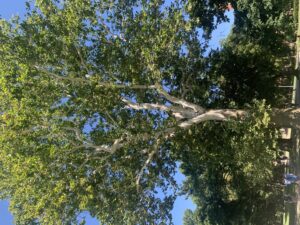 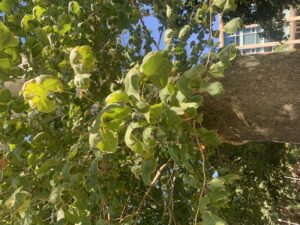 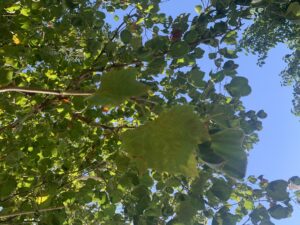 An interesting fact about the American sycamore is that when the leaves fall or if it is sick from a fungus, the leaves curl up (as shown in the second picture) and eventually fall off. Although it may be hard to tell exactly when they are curled up if it is just because of fall and they are getting ready to fall off or if it is due to the fungus. In the third picture, you can see how the sycamore leaf is supposed to look when not curled up.

This next one is also a very common one, and one that can easily be distinguished from its leaves. That is the red maple, or scientifically known as Acer rubrum. A. rubrum has an opposite leaf arrangement with simple leaf complexity. To distinguish a Red maple from other maples, you can simply wait around until fall and notice how the leaves turn red, or you can look closer at the leaves are notice they are more toothed. Red maples also have a reddish stem coming from the leaf. Although there are red maples everywhere, I found this specific one on the oval, which is an urban environment. 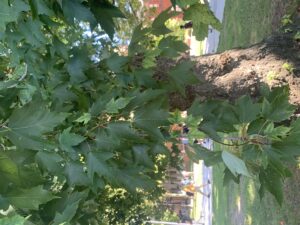 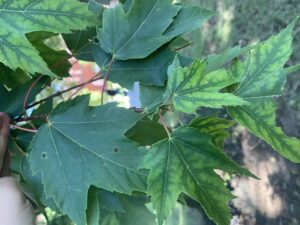 The last species I wanted to do is the littleleaf linden, or the Tilia cordata. T. cordata stood out to me because the leaves were a lot smaller than most of the other tree species I did. This species has an alternate leaf arrangement with serrated margins and a simple leaf complexity. As seen in the two pictures, these leaves are very small in comparison to others we have looked at. I also located this tree on the oval where it is an urban environment like most of the rest I found. If you can not tell by now, the oval has many different tree species and is not biased at all. 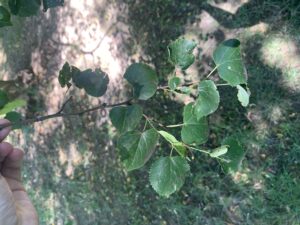 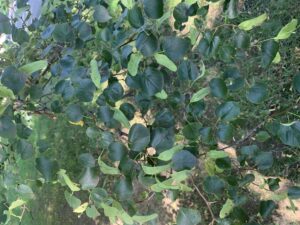 An interesting fact about T. cordata is that the small yellowish flowers supposedly have properties that make it good for medicines and can also be used in the making of honey.

As you can see, it does not take much time to get acclimated to trees and identifying them. All it takes is just some time out in nature looking like a crazy person while you stop and stare at every tree you pass. Doing this alone with help you learn more and more about tree species and how each stand out. When doing this myself, I have learned so much, even as much as knowing that a species even exists. I have to say, with knowing all of this now, I will be anything but “tree blind”, and I suggest you go out and do the same.