The site that I chose to do for my botanical survey is a place that is very important to me, Battelle Darby Creek Metro Park, and more specifically the Indian Ridge Area. This park is close to my heart because I have worked there as a park ranger throughout the summer and still currently work there and absolutely love it. This park has many different kinds of vegetation including prairies, forest areas, and even wetland areas due to it being close to Darby creek. Many times this summer I have started to explore the parts of the park and tried to find new things that I have never seen before so I decided to make this my survey site in order to learn even more about it. I hope you guys love it just as much as I do! 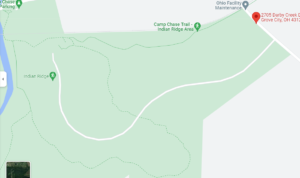 First up we have the slippery elm or Ulmus rubra, which I found in the Indian Ridge area near the trail crossing and the road down to the parking lots. Did you know that the slippery elm has a lot to do with Independence Day? In fact it does, the yoke of the Liberty Bell in Philadelphia is a 200 pound beam of slippery elm. The slippery elm is also associated with another historical event, the Revolutionary War. It is said that an American soldier survived for two weeks out in the wild while mainly eating the inner bark of slippery elm. 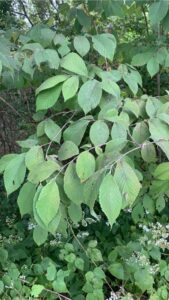 Next we have the northern catalpa or Catalpa speciosa, which was found on the camp chase trail that runs beside the Indian Ridge area. C. speciosa is known to attract the similarly named, catalpa sphinx moth, which lay their eggs on the tree. Another interesting and historical fact about  C. speciosa is that it was first used fence posts and railroad ties because it grows fast and is resistant to rotting. 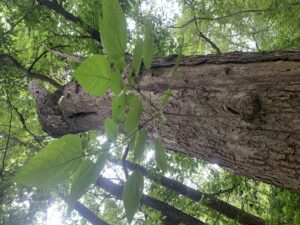 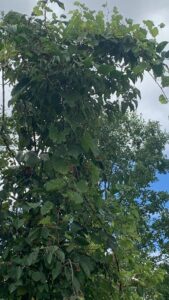 Soon after finding this V. riparia, down the road to the parking lot of the Indian Ridge area, I also came across an Allegheny blackberry or Rubus allegheniensis. R. allegheniensis contains blackberries which are good food sources for many birds and mammals, and even humans too! An interesting animal interaction also with the Allegheny blackberry is that the brambles offer a great nesting area for Indigo Buntings, which is a small blue bird for those who don’t know their birds that well. 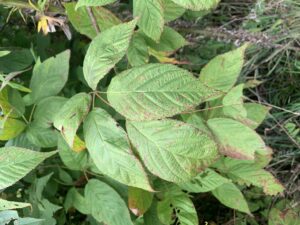 This first flowering plant that always catches my eye when entering the Indian Ridge area is the sawtooth sunflower or Helianthus grosseserratus. When driving in the this part of the park you will see many of these on both sides of the road all the way until the very end. 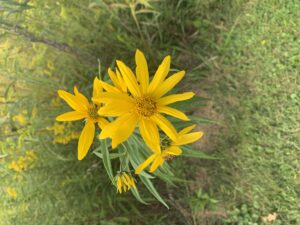 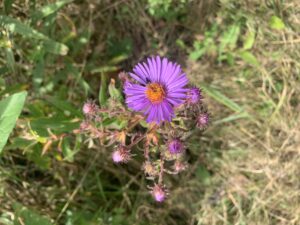 If you ever plan on going out to Battelle Darby Creek Metro Park Indian Ridge area, be sure to wear long pants and long sleeves because you never know when you might come across some poisonous plants, especially poison ivy or Toxicodendron radicans. After working at this park during the summer I had no idea there was so much poison ivy around me, but when looking for plants today, I was able to find so much of it. While on my walks, I made sure to look out for plants near the ground, or growing up the bark of other trees, that have trifoliated leaves, which means each leaf has three leaflets! The leaves also tend to be smooth or slightly toothed, not deeply lobed or serrated. So next time you are out in the woods, but sure to take a look around and make sure you don’t see a plant that contain these key features of poison ivy, and if you do, but sure to not touch it! 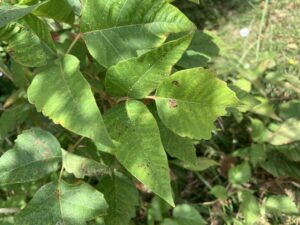