Jane Forsyth in “Linking Geology and Botany: a new approach”, gives examples of plants that are associated with acid sandstone places, while on the field trip to Hocking county, I came across a few of these.

One of these acid-loving plants is chestnut oak (Quercus montana). Some of the human uses for Chestnut oak include being used as fence posts, fuel, and the tannin extract is used in processing leather. Chestnut oaks support a good amount of insects including butterflies and moths, and can also be a good food source for animals like wild turkey, deer, songbirds, and other mammals. 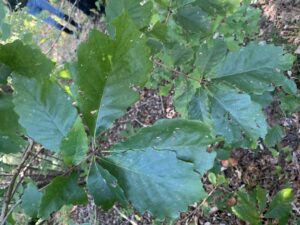 Another acid-loving plant species that Jane Forsyth mentions is eastern hemlock (Tsuga canadensis). Like the chestnut oak, hemlock bark was also once a source of tannin that was used in leather, the wood is now used as pulp and paper. As a conifer, the stand of hemlock provides habitat for many wildlife species. Eastern hemlock is a monoecious plant, which means it has both male and female flowers on the same plant, they are in separate clusters but on the same branch in hemlock. 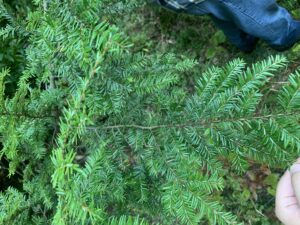 Next on the list for an acid-loving plant is Sourwood (Oxydendrum arboreum). The flowers on sourwood are very popular for butterflies and bees, and the honey is also very popular to humans as well. The bark contains natural hollows that make it easy for small wildlife to climb. This tree is also heat tolerant and resistant to fire. The leaves of the tree contain oxalic acid and has an acidic taste, they have been used to make tea, and used to treat asthma and indigestion. 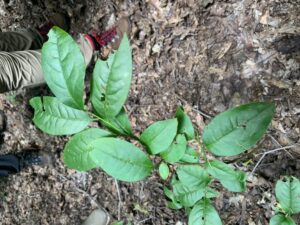 The last acid-loving plant that I was able to get a picture of is Deerberry, which is a species of blueberries (Vaccinium stamineum). Considering the common name, deer are big fans of the ripe fruit of deerberry. Along with deer, other mammals and birds also love the berries and leaves of deerberry. The fruits on deerberry are in contrast not edible to humans unless it is sweetened. 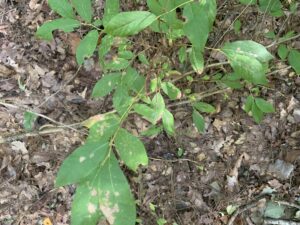 Lastly, I also wanted to add in another acid-loving plant that I saw while on the trip, but did not get a picture of it, which is pink ladies’ slipper (Cypripedium acaule). This wildflower is in the orchid family and is large and showy. The root of this flower was used to help tooth pain, muscle spasms, and nervousness. Pink ladies’ slipper does require bees for pollination and actually do so by trapping the bees and giving them no reward for pollination.

Butternut or white walnut (Juglans cinerea) is affected by a fungal disease called butternut canker. It is caused by the pathogen Sirococcus clavigignenti-juglandacearum, which is believed to originate in Asia and first documented in North America in 1967, and was specifically first found in Wisconsin. The fungal disease induces the formation of cankers on infected trees, and because of how virulent the disease is, butternuts die quickly once infected. These cankers on the trunk prevent the tree from distributing water and nutrients. There is no current cure that is known, but the United State and Canada are both working to protect butternut. Fungicidal treatments are currently not affected against this disease. If detected early, the infected branches can be removed to prevent the spreading of the disease. To help prevent the disease, it is a good idea to water often, especially during long droughts, add mulch to the area around the tree to improve the soil and help it retain soil moisture. There is also still research being done to help stop the spread of the disease, cure the disease, and prevent it as well. 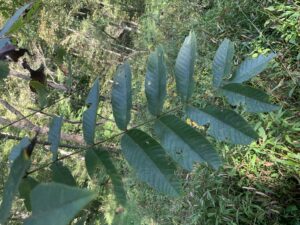 Eastern hemlock (Tsuga canadensis) is affected by hemlock woolly adelgid (Adelges tsugae), an aphid-like insect, which is also an invasive species, that attack and kill hemlock trees by feeding on nutrient and water storage cells at the base of the needles. It is believed that hemlock woolly adelgid was brought to America from a nursery stock from Japan that was infested. It was first discovered in Virginia in the 1950s. The insects can be recognized as white woolly sacs at the base of the needles on the most recent twigs of hemlocks, the discoloration of needles or branches, and the early dying of twigs and branches. These insects impact the trees greatly and this in turn hurts the animals that use this tree as a source of food and shelter/habitat, such as birds. Hemlocks also play roles in regulating and maintaining water temperatures, thermal cover for deer and birds, streambank stabilization, and also play roles in many different natural cycles. There is a regulation put into place where there are requirements when moving hemlocks because it helps to contain and prevent the introduction of the hemlock woolly adelgid. A few management ways that are used to stop the spread of this invasive species, is to not put bird feeders near hemlocks because they can possibly be a transporter, to not move firewood from one area to another to prevent the spread, and to keep an eye out for early signs of the aphid-like insect. There are also other management being done to trees that are already infected, such as treatment with insecticides, or if the tree is too far gone, cutting down and burning the tree onsite. There are detection surveys currently being done to find the invasive species are soon as possible and there is more research being done to improve the surveys to bigger and higher distances. There is also research still being done to improve the insecticides being applied, as well as working to find a natural enemy to the aphid-like insect. 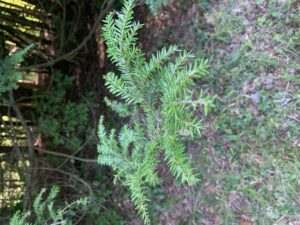 After reading “Unraveling the Origin of the Appalachian Gametophyte”, I have come up with a description very similar to that in the article. Vittaria appalachiana common name is Appalachian gametophyte. The temperate member of an almost completely tropical lineage inhabits the Appalachian mountains and Plateau of the eastern U.S. It grows on porous rock outcrops and is usually adjacent to water. The species also exists almost exclusively as a vegetatively reproducing gametophyte. It is one of only three ferns where mature sporophytes have never been observed. Rather, Appalachian gametophyte reproduces asexually through gemmae, which are vegetative propagules consisting of a few cells that are produced along the margins of the gametophytes. When mature, these gemmae can separate from the gametophytes, disperse small distances, and grow into new and independent individuals, but identical genetically.

When compared to spores, gemmae are much bigger, usually 0.2-1.0 mm in length, and usually considered too big for long-distance wind dispersal. Therefore, gemmae are more likely to be dispersed over short distances by wind, water, or animals. The 1995 publication by Kimmerer and Young is given as evidence for animal dispersal, and this is that bryophytes gemmae dispersal has been done over shorter distances by slugs.

The notion of limited dispersal capability in V. appalachiana is also supported by the absence of this species north of the extent of the last glacial maximum, beyond which a transplant study has shown they are able to survive. Even recently disturbed areas or other substrates that appear suitable within the range of Appalachian gametophyte frequently remain uncolonized, while the species flourishes on seemingly similar substrates close by. Together, these data suggest that spore dispersal from a fully functioning sporophyte must have been responsible for the current distribution of the Appalachian gametophyte. The truncated range of this species in southern New York likewise indicates that the gametophytes lost their ability to produce mature, functioning sporophytes sometime before or even during the last ice age.

The possibility that the current populations of the Appalachian gametophyte are being sustained by long-distance dispersal from some tropical sporophyte source can be rejected based on past allozyme studies, as well as the truncated range of V. appalachiana in the southern portion of New York. The monophyly of V. appalachiana in our plastid analysis would indicate that dispersal from the tropics occurred just once, although the situation is more complicated in the nuclear tree, where one V. appalachiana allele is resolved outside the larger V. appalachiana clade. Since the dispersal of gemmae does not appear to account for the wide range of V. appalachiana, it is most likely that a fully functioning sporophyte of this species existed and even thrived in North America when temperatures were more favorable for tropical growth in the Appalachians. Based on this, the current distribution of V. appalachiana would be because of spore dispersal, with the sporophyte becoming extinct before or during the Pleistocene glaciations. This is supported by the Appalachian gametophyte’s inability to extend northward beyond the limit of the last glacial maximum. If the gametophyte produced sporophytes after the glaciers had receded, spore dispersal could have extended the range of this species further north. 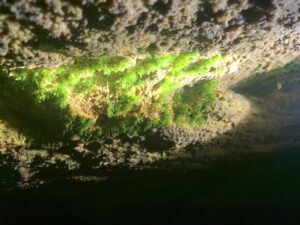 Two Flowers in the Asteraceae Family

While on the trip in Hocking county, I saw many flowers that are in the Asteraceae family, which include: 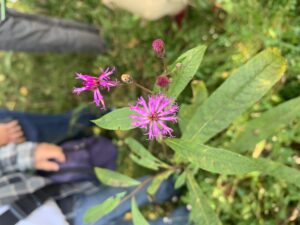 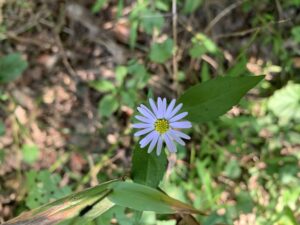 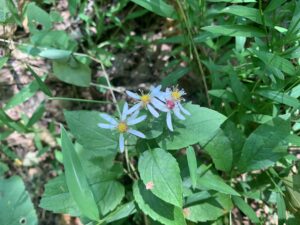 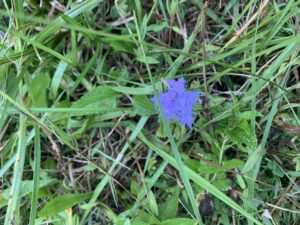 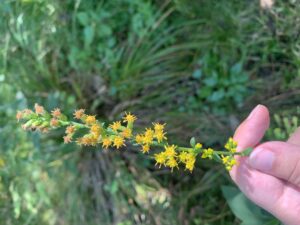 While on the trip we also saw other types of botanical wonders, including parasitic plants, ferns, invasive grasses, clubmoss, and more. I did one of each of the botanical wonders I listed above to try to have a variety of things.

I first want to talk about one of the parasitic plants, American cancer-root (Conopholis americana). This is a parasitic plant that only grows near oaks where it attaches to the roots. This plant does not have any green coloring in it because it does not contain chlorophyll. Even though the common name may allude to it, there is little to no scientific evidence that it has any cancer prevention or causing properties. The common name most likely is due to the parasitic growth form and the nature of the plant. There is evidence of Native Americans using a close relative (Conopholis alpina), as a treatment for tuberculosis, but it is unknown how effective this treatment is. 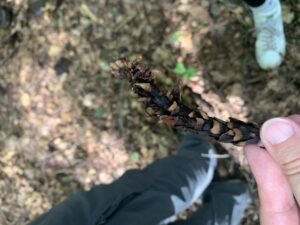 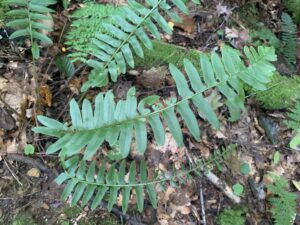 For the next one, I want to talk about one of the two invasive grasses that we saw, Japanese stiltgrass (Microstegium vimineum). Japanese stiltgrass (Microstegium vimineum), an invasive grass, was likely introduced as packing material in shipments of goods. It was first discovered in North America in Tennessee in 1919. As most invasive plants are, stiltgrass is adaptive and can grow in many types of light as well as different nutrient-level environments. Siltgrass is usually established after disturbances such as flooding and is found near roadways, trails, and more. In order to prevent spreading, it is good to keep equipment cleaned between mowing jobs, and to disinfect/clean boots and other equipment used during foot traffic as well. 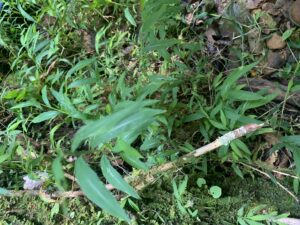 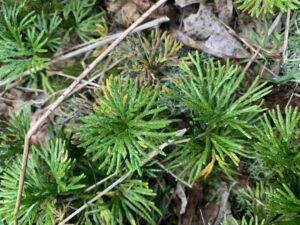