OSU’s wetland park is located just north of campus. It was created in 1993-94 as a space to study ecological restoration, animal and plant communities, and wetland hydrology. Though it is primarily a research facility, it also serves as a recreational opportunity for the myriad students and families that live nearby. It’s 52 acres and has a bike path and walking trail. Previously I’ve been there for casual bird-watching, bug-inspecting, and just walking in nature with friends. 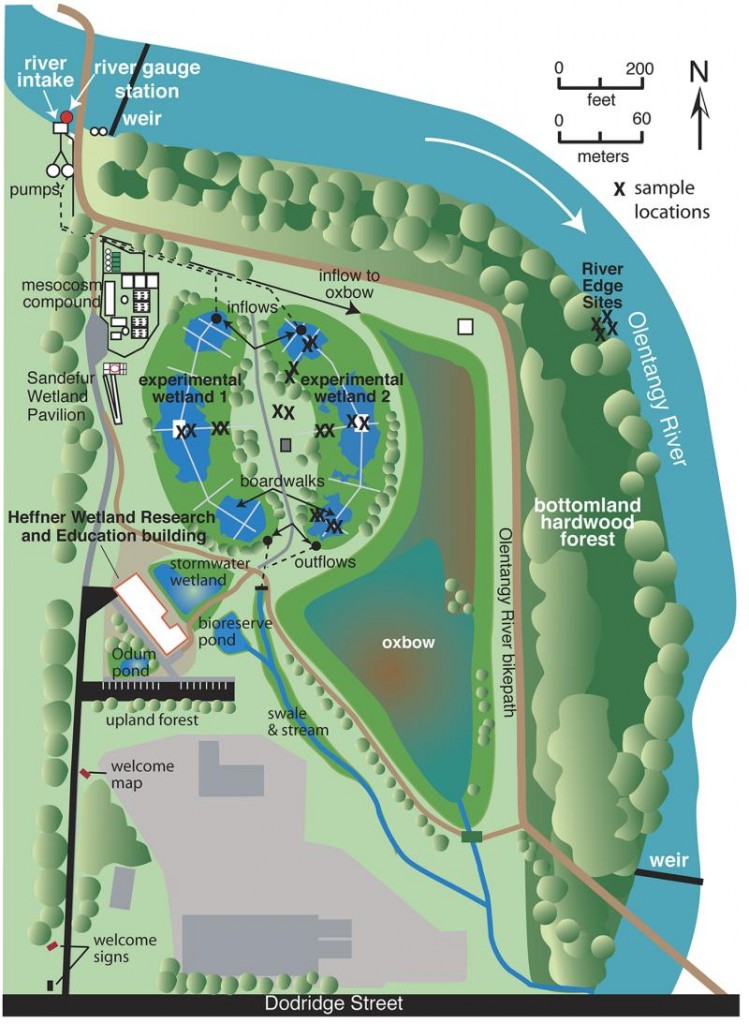 A map of the Wetlands Research Park from https://u.osu.edu/orwrpramsar/orwrp/.

The park holds the potential for many different environments in a relatively small area. Today I was off to survey its plant communities for plants that haven’t already been featured on this site’s Flowers and Trees pages.

Two new trees today, starting with one near the Wetlands Research Building!

Apparently the “box” comes from the fact that its wood is pale like boxwood, and the “elder” because its leaves look like those of the elderberry… This guy just can’t do anything original.

This is boxelder, Acer negundo, the maple species that looks least like a maple. It can be identified by its leaflets of three on long, slender twigs and its shiny green younger bark on the twigs and (for saplings) the whole plant. I found both older boxelder (above) and younger (below), and thought it best to take pics of both to compare.

It’s not easy being green…

I ventured into the “bioreserve pond” (see map) near the Wetlands Research Building and accidentally startled a Leopard Frog, but it was too quick for me to get a photo. Good thing plants can’t run! Very close to the water’s edge I encountered a strange sapling with stipules totally encircling its stem at regular intervals, coupled with leaves that were long and narrow. Some type of willow – probably not to hard to key out, right? At this point, I learned that there are 55 willow species represented in the Peterson’s Guide to Trees and Shrubs.

The process of trying to identify this tree taught me that willows usually require more than just a photo of the topside of the leaves, but I felt it was most similar to the Heart-leaved Willow, Salix eriocephala – the stipules are too prominent and the leaves too long and narrow (with wavy margins) to be any of the others I looked at. This could be wrong, however; willows as a genus are quite complex and even form myriad hybrids across North America!

Not oppositely arranged, exactly, they’re more spiraling around the stem. Also enjoy my fashionable sandals. It was very muddy.

In the category “Smaller than trees, bigger than wildflowers”, I found two new shrubs or vines on my expedition!

First up is the Virginia creeper, Parthenocissus quinquefolia, which is very abundant in the park. It’s also called “woodbine”. Its species name means “five leaves” in Latin, and it is easy to see why. Palmately compound leaves similar to the leaves of the Buckeye tree drink up sunlight and climb anything they can find. Though we welcome its aggressive growth here in its native range, it is actually invasive in the United Kingdom. Virginia creeper is also the favored host of a cute little brown sphinx moth, Darapsa myron.

This next vine was also abundant in the forested areas of the park, but most of the leaves were too high for me to photograph and I got mosquito bites trying so I hope you appreciate that. It’s the Riverbank Grape, Vitis riparia. They actually do make tiny grapes, but they aren’t good to eat. Very bitter.

Next we are looking for flowers and fruits!

This plant caught my attention near the wetlands research building with its curiously pea-like purple flowers. It’s called a Vetch, which sounds more like a Dungeons & Dragons monster than a wildflower. Specifically, I think this one is Tufted Vetch, Vicia cracca, a species that is invasive to North America, though its cousins are native. Vetches are in the family Fabaceae, so they are indeed related to peas. Like many other legumes, they are nitrogen-fixing.

Vetches are identified partially by how many flowers they have on one stem. This species has lots!

A sprawling, unruly growth habit lets it climb over other plants to steal their light.

On the eastern side of the oxbow, by the bike path, I discovered a stand of Rough Horsetail, a.k.a. Scouring Rush (Equisetum hyemale) in the midst of sporing. This plant’s many upward-thrusting “stems” are actually its leaves, and they are hollow. It accumulates silica granules within these leaves, which makes their texture “sandy” and good for scouring pots (as pioneers did), hence the name scouring rush.

The “head” of the horsetail is soft and contains spores, like a fern’s sorai.

“In natural areas”, states New Moon, a native plant nursery, “Equisetum hyemale often occurs in monotypic stands.” This is apparently code for: it does its best to crowd out everything else.

I love this plant because it’s primitive, a “living fossil”, unique and primordial. Its ancestors were around in the Paleozoic (albeit in a more tremendous size) and the lineage hasn’t changed much since then.

And in among the horsetails… a dangerous and ubiquitous plant prevented me from taking closer shots.

Poison ivy (Toxicodendron radicans) has a couple of different growth patterns, but right now this one is very common. I saw it everywhere in the park that had even partial sunlight. It displays three leaves, the left and right leaves being slightly lobed on their upper margins. The middle one have this lobe on both sides or neither. It is a very symmetric plant. Weirdly, it looks a lot like the Boxelder I saw earlier! The main difference is that it’s clearly not a tree. Were it fruiting it would be even more obvious; the boxelder, like other maples, makes small papery samaras, but poison ivy makes little bone-white berries, very distinctive. It is called ivy for a reason though; it twines its way up tree trunks very quickly to reach the sunlight. Here poison ivy assails a maple tree:

I hope you enjoyed this reconnaissance mission into the Olentangy Wetlands. Stay tuned because there will be more to come from this fantastic location!